American deathcore titans Suicide Silence are on an Asian rampage as we speak! We hooked up with the Thai opening acts Tragedy Of Murder & Sin Of Suffering on the day of performance for a little chat.

As you already know by know from our kickass feature about the Thai Death/metalcore scene – deathcore is huge in Bangkok. More and more foreign deathcore/metalcore bands are finding their way to Bangkok and today one of the biggest bands in the whole genre makes their 3rd gig in this intense concrete metal maze.

American Suicide Silence are without a doubt one the deathcore genre´s most important and probably most influential bands. And I must say, they also have one of the more interesting tour schedules so far this year. Suicide Silence just launched their Southeast Asian tour in Hong Kong yesterday and today they´re coming back to Bangkok. The guy in charge of the tour plan obviously knows his shit since the stops on this tour includes some surprisingly well thought through important metal cities. What about Kuching on Borneo, Medan and Bandung in Indonesia, Beijing & Shanghai in China and Taipei in Taiwan? This will kick ass.

To me, the biggest surprises are the Indonesian bookings. Medan being a huge hardcore and deathcore city and, well Bandung is like the capitol of pretty much all metal genres in Southeast Asia. So, someone knew their shit and got Suicide Silence the Southeast Asian tour they will never forget. I´m not sure they know what their getting into, these shows will be super intense and epic. 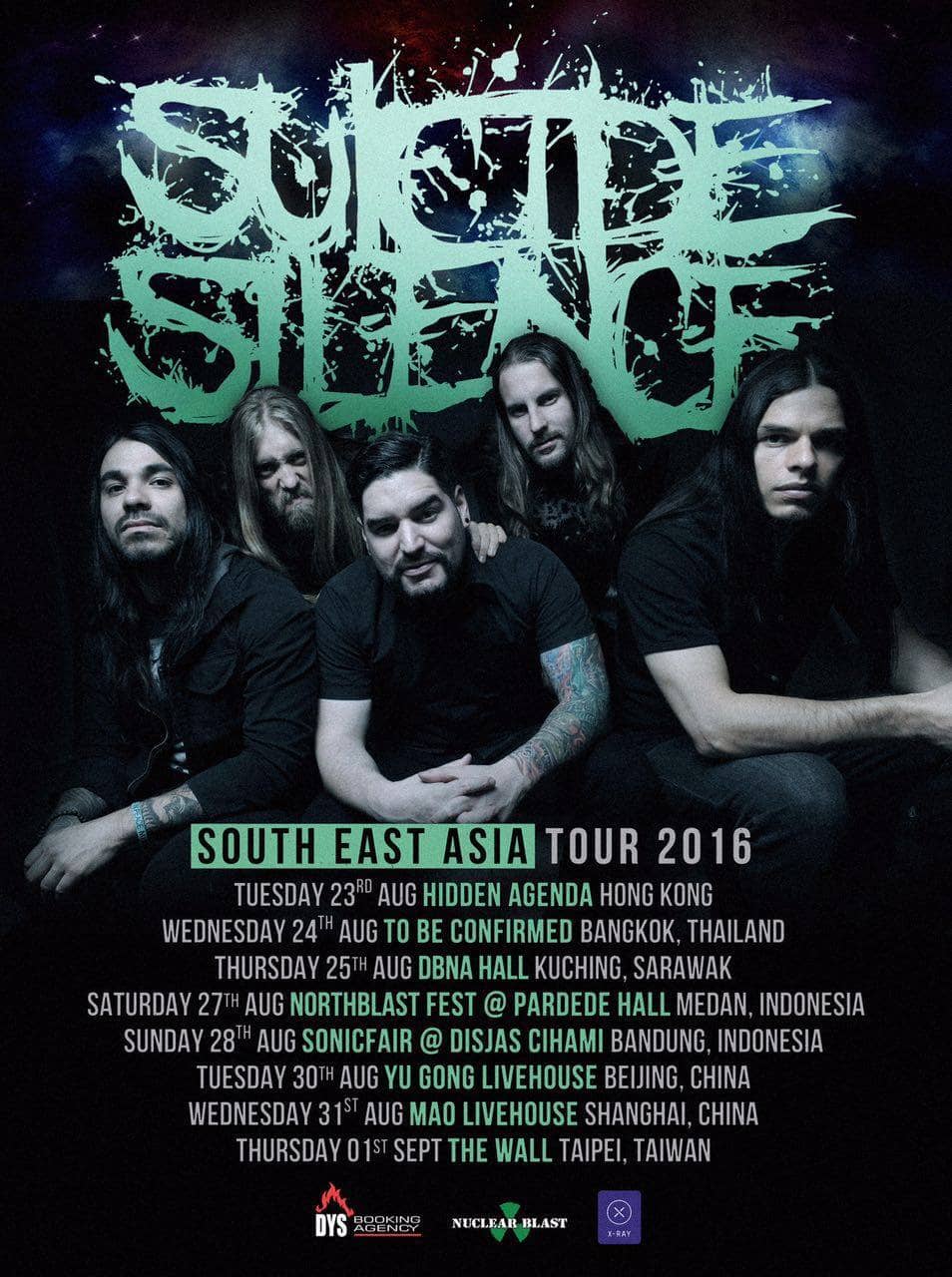 Today the Californian lads will play infront of some thousands crazy and super psyched Thai metalheads and we had a chat with two of the three local opening bands, Tragedy of Murder & Sin Of Suffering. The other opening acts is As Paradise Falls from Australia. These are two of my own personal Thai death core bands and holy shit I wish I could be there today and watch this epic show.

I wanted to see what Suicide Silence have really meant to the Thai deathcore scene, how these local bands got this opportunity to open for them and what it feels like being the opening act for your idols and main influential bands. So I had a chat with Tragedy of Murder and Sin Of Suffering to shed some light on all this.

Suicide Silence have been to Bangkok several times before, and clearly they have influenced many Thai deathcore bands. How much has the Suicide Silence live shows in Bangkok impacted the Thai metal scenes?

Tragedy Of Murder (TOM) – I think todays show has only a little bit of impact on the Thai Metal scenes, but the first shows were very important with a big impact, because Suicide Silence then came with Mitch Lucker. And deathcore became very popular from that on.

Sin Of Suffering (SOS) – Suicide Silence have influenced the Thai underground metalheads so much! Because todays metal-era in Thailand is so prosperous. And back then we had a lot of deathcore bands haha, but now it´s reduced to a few bands. Anyway Suicide Silence are still in both my and in the thai metalheads hearts!

What does Suicide Silence mean to you guys, in terms of musical influence and appearance?

TOM – Suicide Silence is the icon of deathcore. And yes they are an inspiration for my band. Wait, no no no, it´s not only for my band –  I mean for so many deathcore bands in the world! But do you know, actually my band was established in 2006 and we picked many songs from the “Count Your Blessings” album by Bring Me The Horizon. We covered them and played in the music room haha.

SOS – They were very influential for my band in the beginning. But after so many foreign deathcore bands keeps coming up and also playing here, then it´s not as influential as before, we get influenced by others as well now.

How did you get to be the opening acts for Suicide Silence – did you get invited or did you have to “compete” to get the gig?

TOM – The organizer event team knows my band and I talked with them for the opportunity to be the opening act. They accepted my request and they are confident about my band because we have more than 10 years experience of playing shows. We are very excited and this is the second time we get to be opening act for bands from other countries. The first time we opened for Born From Pain from Denmark and now we expect many more people will know about my band!

SOS – Someone who does the organization for concerts saw how we work so hard to be a great band and then they invited us for this show!

Being an opening band for such a big international band, tell us how that feels like? Are you nervous  and excited?

SOS – We are so excited about being the opening act! It´s the first time for us and since Suicide Silence is a world class band. And everybody knows them, that’s why me and my band are so excited haha! 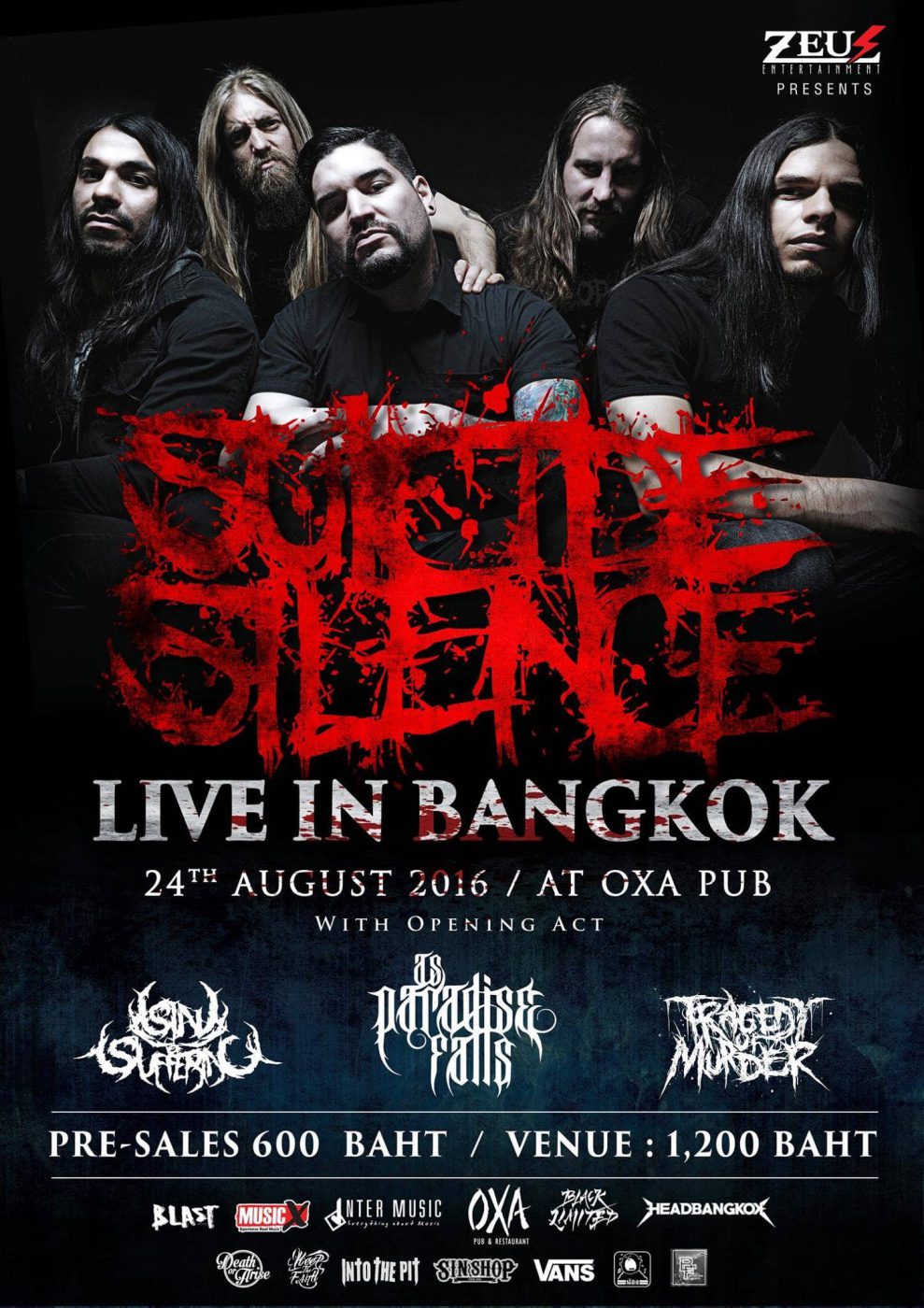 How do you prepare for a gig like this? Do you rehearse more or plan anything extra for the live show?

TOM – We have been doing some really hard rehearsing for this show and we also have a new song, it´s a cover song to surprise everyone. Together with our old songs we have 10 songs in total for this show.

SOS – We practice so hard, like twice every week and then more and more the closer we get to the gig. We´re tired but feel good!

Are the tickets fairly priced or too expensive for normal metal kids for a show like this?

TOM – The price is very fair. The pre-sale is only 600 Baht (about 17 USD) so it´s very cheap for Suicide Silence. What do you think? Haha!

SOS – Yeah about the tickets I think it´s not expensive because it´s great value for money!

How many fans do you think will come to see you guys and Suicide Silence?

SOS – I know most fans of my band are coming, because we are all friends in the underground music scene in Thailand, it´s so small so thats why haha!

Tell us, how is your day of performance? Like from when you wake up to just before the show? Any special band rituals, preparations or other things you do in order to get really prepared and 100 % psyched?

TOM – On the show day I must go to work for half a day and after that I will join with our band in the OXA Pub  (the venue) for soundcheck and some rehearsal to really prepare 200% before the show.

SOS – On that day we have prepared everything and we will do our best as much as we can!

Do you get any exposure in local media about this gig? Like in mainstream newspapers or TV and other non-metal media?

TOM – I think you know that metal and hardcore scenes are not a target for marketing in mainstream media haha. The advertising is only on Facebook and Headbangkok (local metal media) are also promoting the show.

Lastly, for a big show like this one, is it safe from police raids or other interference? Do you ever have any problems with the Police on metal gigs i Thailand?

SOS – This show has to take care of the artists and the others who participate as well, to guarantee their safety.

TOM – I think everything is ok and safe from police raids. Actually every concert event, not only metal and hardcore, have problems with the police. But you can easily fix those problems by paying them the concert permit. Hahahaha it sucks.

Well thank you so much guys for taking your time for TMR and we wish you all the best of moshpiting luck tonight! Go kick some ass!

So if you´re in town and feel like getting some serious violent moshpiting and catch these great bands, drag your ass over to OXA PUB at 244/7 Ratchadaphisek Road Huay Kwang, 10310 Bangkok, Thailand