TMR went to Medan on Sumatra / Indonesia back in 2014 to meet the metal and hardcore scenes, but we never heard about this awesome band called APSINTUS.

Maybe that because they hadn’t released their debut album entitled CIRCLE OF HOPE yet. The debut album came out in February 2016 and Apsintus emailed TMR recently and asked us to highlight their new album and since that´s what TMR is all about, then of course we do just that!

Here is the info provided by the band themselves and we wish you guys all the best in the future! Maybe there is a review coming up soon here on TMR? 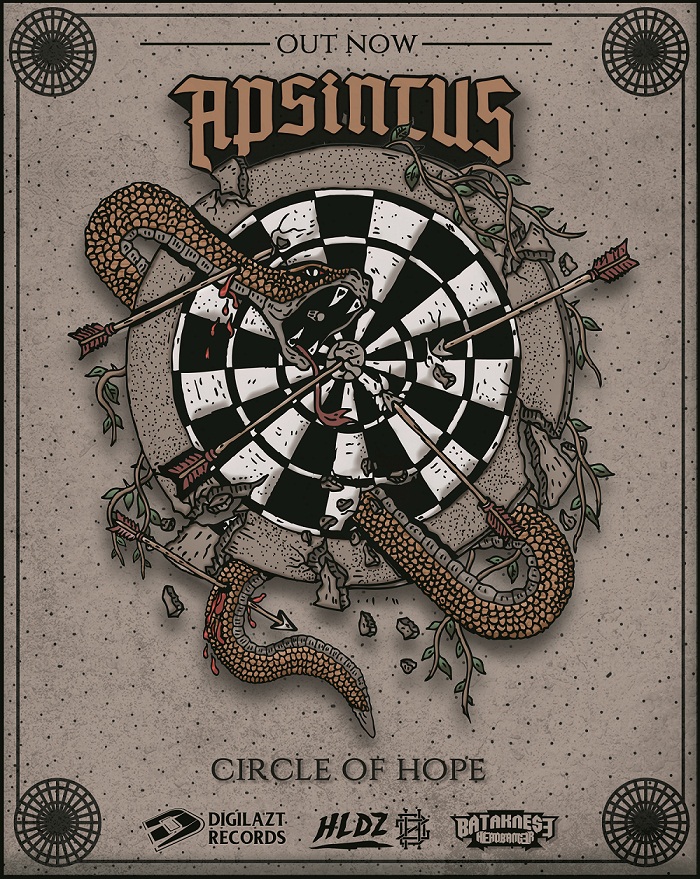 Apsintus was formed in March 2013 that the name itself is taken from the Bible meaning the last star falls to destroy the earth. But in fact the name itself has no meaning excessive. All personnel are from a small town far from the Medan city, namely Tarutung. At the beginning of the formation of us consists Rey Hutabarat (vocals), Yogi Pasaribu (Guitar), Uncle Yoss (Bass) and Jimy Burju (drums) released a demo containing two songs “Come Up Against” and became one of the bands on the compilation album Indonesian Metalcore 2013. in 2014, the vocal Rey resigned for reasons of work outside the city, was replaced by Frans Erwin and Apsintus immediately released a new single entitled Beautiful Mask which also took part in the Indonesian Hardcore compilation album of 2014. in that year also, we fill a compilation album Medan Teriak II with a song called A Dream For Life.
In early 2015, we started to prepare the material for our debut album which was inspired by bands Hardcore American continent and Europe as The Ghost Inside, Obey The Brave, Comeback kid, Your Demise and others. At the times of the album many obstacles encountered in other than the band itself back up vocalist Frans Erwin was replaced by Rey Hutabarat. Finally, the first album Apsintus “Circle Of Hope” is done in Digilazt Records release in February 2016 by issuing a new song Taklukkan Dunia.
Line up: Rey Hutabarat (Vocal)-Yogi Pasaribu (Guitar)-Uncle Yoss (Bass)-Jimy Burju (Drum)
More info: