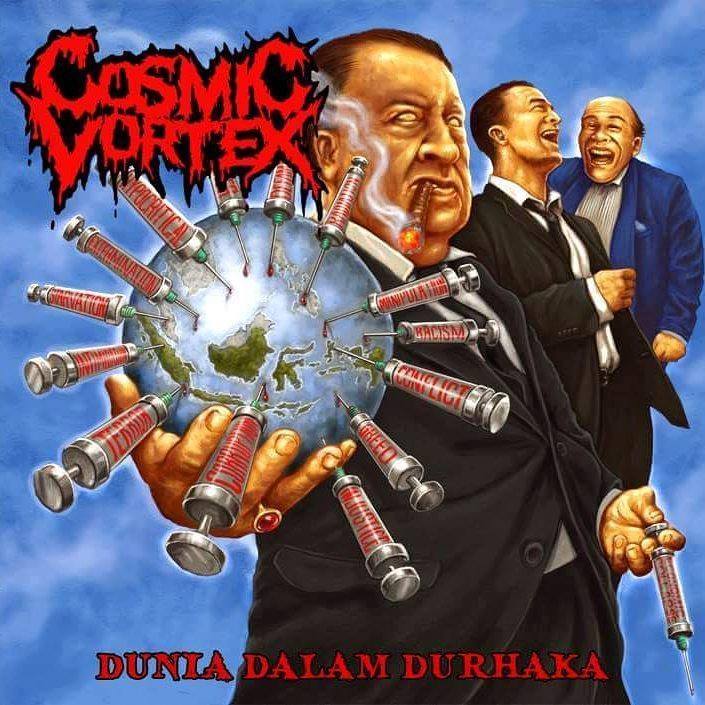 Cosmic Vortex is a Jakarta based old school grindcore band, dating back from 2011. They have released 2 albums since the start, and the latest effort DUNIA DALAM DURHAKA is a real iron fist to the face.

For fans of Terrorizer, Lock Up and of course Napalm Death, you´re gonna circlepit the shit out of your apartment to this one. It´s just pure violence. Tight violence I might add. And to my great listening pleasure it´s also very well produced. The drums doesn´t get too muddy or drawn in the wall of distortion, they are pretty clear and in your face. I personally love the attacks on the ride cymbal head, giving that extra “ping” bitchslap.

To me it almost sounds a bit death metal-ish at time, the guitar riffs and harmonies are kinda catchy and evil, yet with the old school grind-punk approach. Napalm Death is a big influence and that´s never bad in any way.

I have to mention the vocalist Didik – he´s absolutely killer! In fact I think he´s reminiscent of Napalm Death´s characteristic ultra violent and frustrated vocal styles, adding another dimension over all the instruments.

I´d maybe go so far as to say that Cosmic Vortex has one of Indonesias best grindcore vocalists. Maybe. Probably. Could be. What do you think?

Anyway, the new album DUNIA DALAM DURHAKA (UNGODLY WORLD / IN A LAWLESS WORLD, depending on how you translate it) is a crazy fast and violent rollercoaster ride over 14 tracks. Cosmic Vortex keeps bitchslapping you with their fast and rhythmic grindcore, keeping most songs close to the 2 minute mark. After an intro entitled The Arrival that feels like an epic intro to a concert, the opening track Tujuh Misteri sets off like a crazy person and moves into groovy sections that fans of metal, hardcore, punk and all kinds of core will appreciate.

Birokrasi Hitam is just insane, it just manically hammers the message into your head “BIROKRASI – HITAAAAAAM!” The drummer Kevin makes a genius performance here, keeping the blasts super fast but hitting the high-hat in a nice “4/4 beat” on the bridge or verse of the song (whatever it is, its killer).

The bassist Dipa gets his strings showcased in the track BRPO, opening the song with a evil bass. This song has it all, showcasing the whole band´s capabilities and talent. From massive grindcore assault and punky grooves to smart song structuring and arrangements.

“Arogansi” keeps that fine tradition of Cosmic Vortex on this album and the madness just keeps going on, it´s like they are unstoppable.

The title track Dunia Dalam Durhaka is no exception to that tradition and the strong almost deathmetal-like riffing by guitarist Arky just saw their way into your head, it´s really aggressive and violent, but the band pulls off the trick to keep it dynamic and interesting. And the drums just keeps ringing from the ride cymbal, adding that extra attack that I personally love.

Rise of the Dictator, Ideologi Penghancur and The Earth is Only A Puppet Show continues in the same way, not doing anything different or something that would stand out from the album. Thats not bad, since all songs are killer! Well, the last mentioned song is screamed in English, so thats different. And it works very well.

The last 4 tracks of Dunia Dalam Durhaka follows the same patterns as the 10 before them, Cosmic Vortex is a band that knows exactly what they should be doing, and thats very important to a band. They don’t surprise by playing a black metal influenced song, or all of a sudden doing clean singing. They do what they do best.

They play fucking brutal, super tight and dynamic old school grindcore – it´s so much in your face that its´almost painful.

Surga Dunia is a track that actually stands out here, it´s very groovy and dynamic, in the last third of the track it´s almost a hardcore-ish breakdown. I can see the crowds on a live set do the “wall of death” or just one of those classic insane Indonesian circlets. Unheard Disillusion Paradigma starts off less frantic than the tracks before it, with a somewhat death metal groove (if you ask me at least) before it 33 seconds in gets a snaredrum-countdown (fucking love those) and explodes into the machine-gun fast Cosmic Vortex style we have gotten to know during the previous 12 tracks. Closing track Gila (Crazy) lives up to its name and is a great closer, it sums up everything in the album. And even though your mind and ears are pretty abused and worn after this onslaught, it leaves you wanting more.

Cosmic Vortex really nailed it on this new album, and it should be one of the better releases coming from Indonesia this year. If you´re into grindcore it´s criminal not to buy this album.

DUNIA DALAM DURHAKA IS OUT NOW VIA AUNORYSM RECORDS – GET IT HERE!

Cosmic Vortex - Dunia Dalam Durhaka
Short story
Jakarta based old school grind machine Cosmic Vortex do what they do best - delivering a massive grind onslaught that leaves you wanting more. If you´re into oldshcool grind, it´s criminal not to buy this album
85
Grind´d!