I found myself in the company of Beelzebud & Abrasion from Singapore before their gig in sultry Saigon. So after eating halal pho in a small side street amidst the sound of tooting motorcycle horns and street vendors, we got down to business of a Q & A session.

Concert photos: Behind The Stage & HeheMetal 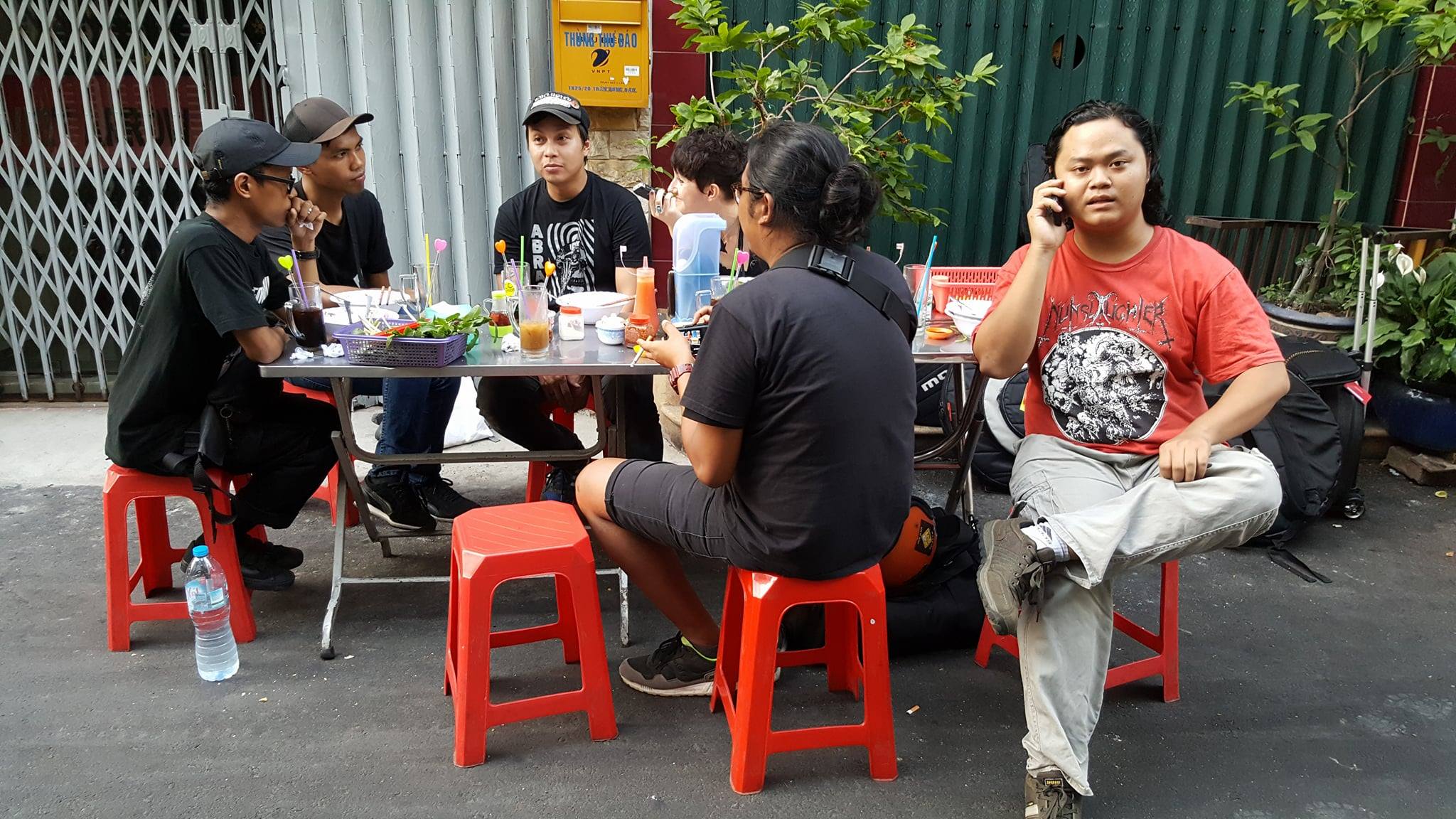 How would you describe your style of music to those unaware?

Abrasion – We are more on the power violence side, grindcore, in your face. To general people, in your face, fast…that’s about it.

You were talking earlier about how many are going to be at the show tonight and you mentioned the audience is smaller in Singapore. What’s the audience like back home?

Abrasion – On a good day we can reach up to around fifty or slightly more than that, it depends on the band too. It depends if they’re a touring band, if they’re pretty well known, there’ll be more. On an average day around thirty.

Jackie – (TMR) – In Vietnam I would say it’s a small but passionate audience.

Abrasion – It’s pretty much the same over there.

Beelzebud, how did you meet?

Mimi – I was working at Beat Merchants studio.

Az – We were both playing different kinds of music. I was in an alternative, psychedelic band. I used to jam at his workplace. I needed another drummer because my drummer was expecting a second daughter. I needed a drummer for a second tour. He played drums in my band for a while, then we hung out and got closer as friends.

Mimi – We got too stoned and decided to play doom, haha.

Az – It was more for fun, not really so serious. In a way it’s still not really that serious.

How do you see yourselves evolving?

Beelzebud (Mimi) – We just go where the wind goes, keep performing, experiment with a lot of styles. We end up not being doom, not metal, a bit of a mish mash.

What have you been listening to lately?

Beelzebud (Az) – I listen to Cocteau Twins, a band from Scotland, an eighties band.

Beelzebud (Mimi) – For me I don’t listen to the kind of music I play. Random stuff really. Good question!

Abrasion (Az) – For me I think it’s good to listen to music out of the genre that you play, you can infuse certain ideas from that particular genre.

What would you say is the most difficult thing as an Asian band today in terms of reaching out to a global audience?

Abrasion(Az) – I suppose to not be the token Asian band and to be categorized as an Asian band.

Beelzebud – The music has been evolving for so long since the eighties, I think the borders between the east and the west have almost disappeared and there’s the internet.

Abrasion you have toured Japan, Malaysia and Indonesia right, any further plans?

–  We want to do Europe in the future, but we don’t have any plans yet.

Do you think there are too many alternatives to showcase your band, for example Bandcamp, Deezer, Soundcloud etc ?

Abrasion – Bandcamp to me is a good platform. Deezer I don’t know, I haven’t tried that to say anything about it.

Beelzebud – I think for us we are kind of like a chilled kind of band, so even though there are many platforms available for us to push we just use Bandcamp.

Jackie (TMR) – The impression I got when I was researching you guys was that you’re happy to remain inconspicuous.

Abrasion – Yeah, yeah, yeah. When you get fans they are the ones who really like your stuff.

How difficult is it to get your music on Spotify, I Tunes, Google Play…if you’ve ever tried?

Beelzebud – The price to put your music there, we know that there’s Bandcamp which is free, we are still reaching out, for us that’s enough. Considering the pros and cons, even though you can get out to more people, you have to pay them for things you’re putting on.

Abrasion – For us it’s the joy of playing and making music, that’s the most important thing first and foremost, whatever comes next, the exposure or the commission we pretty much put that as a secondary factor.

– The primary factor has to be the joy of playing and the fun factor like writing music, exploring new ideas and we wouldn’t want the commercial aspect to dilute this thing we have.

Beelzebud, “Self Titled” to me, especially Durhaka is like a journey, what was your inspiration? Can you shed some light on where it comes from?

You’re right, that’s what it’s supposed to be, that’s a bonus as we don’t really get a lot of people who really understand, it’s like a soundscape, emotions, a journey…

Does it hold any personal significance?

(Az) – It’s kind of complex, the social conditions we are living in, authoritarian state, we are forced to work jobs that we don’t really like.

– We don’t have any avenues for passion, like a modern day hell in the real world, so I guess the very fact we are playing music, all of us, is an act of rebellion.

We are not really conforming to, oh you have to grow up, grow old, get married, have kids and then you die, we want to break away from all that.

I sense the event organizer, my pal Bomb is getting itchy at this point for the guys to go and soundcheck and so I thank and bid Abrasion and Beelzebud farewell and I make a pit stop at my hotel before heading to the venue myself to see the show. 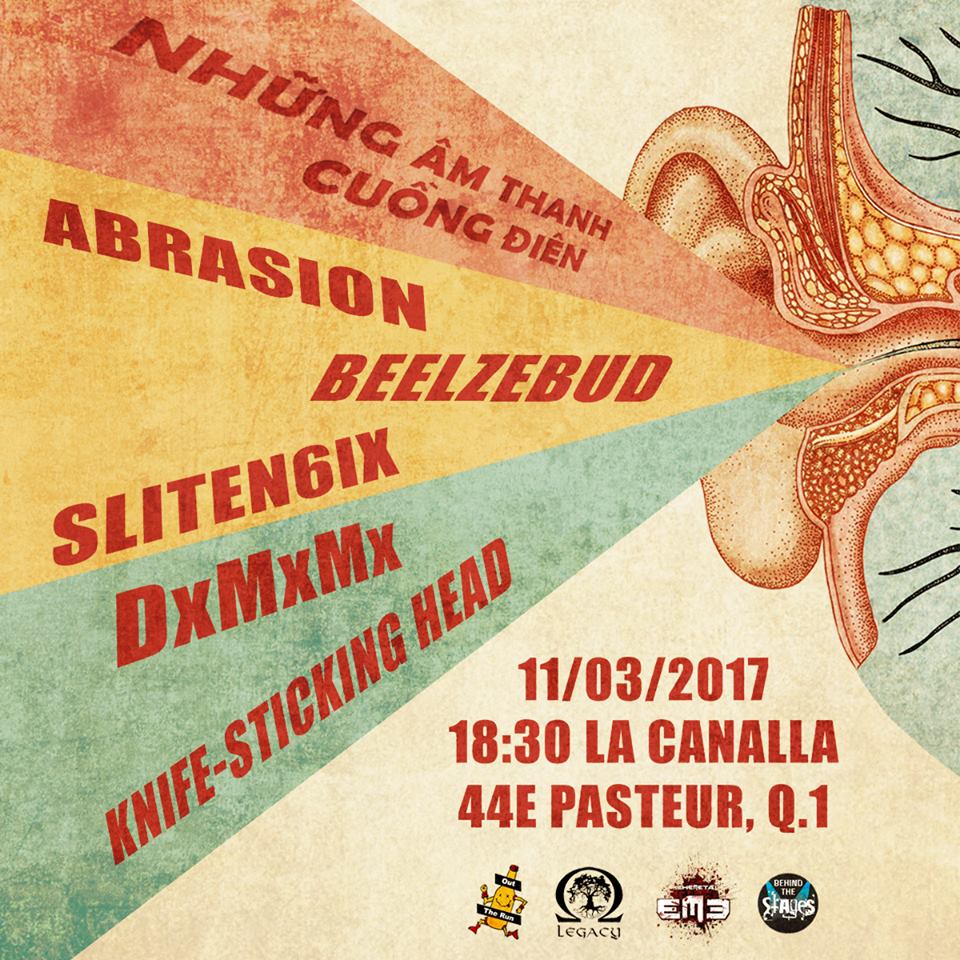 First to take the floor were Vietnam’s very own Knife-Sticking Head, as the opening set these guys had a modest audience to contend with but nevertheless they delivered in true hardcore style filling the floor with a ton of energy. Second up were DxMxMx, these Vietnamese grindcore guys were uncharted territory for me and soon caught my attention with intense throat shredding vocals and true grindcore instrumentals, I was impressed by the raw quality of their delivery. 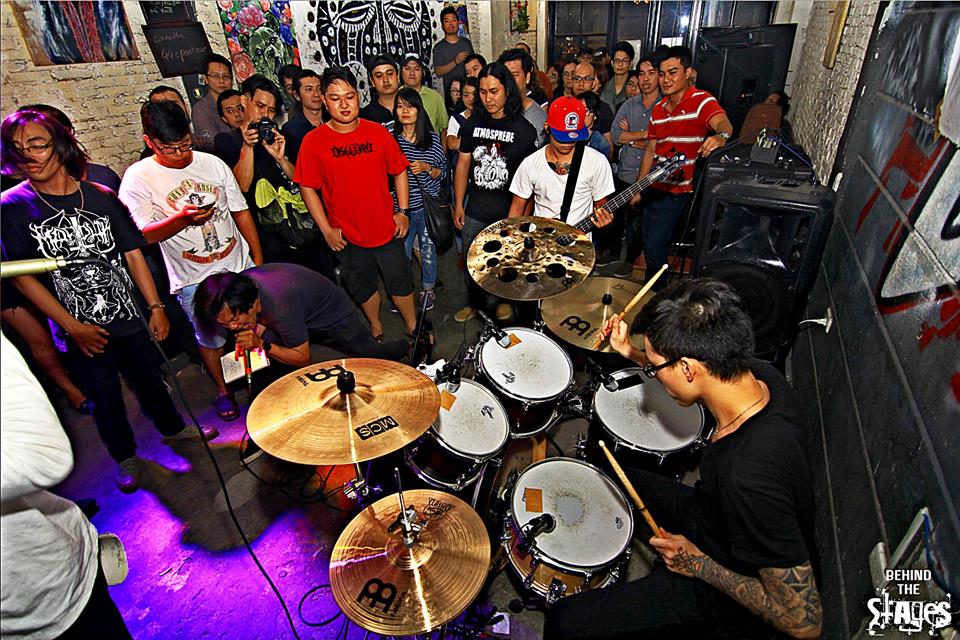 Cambodia’s Sliten6ix from Phnom Penh then took centre stage and treated us to a serving of hardcore and black metal and stirred things up as vocalist Vanntin writhed around on the floor conjuring images of anguish and distress, the atmospheric build up was then trashed with a sudden tempo shift and harsh in your face vocals and the crowd were given a shot of adrenalin. 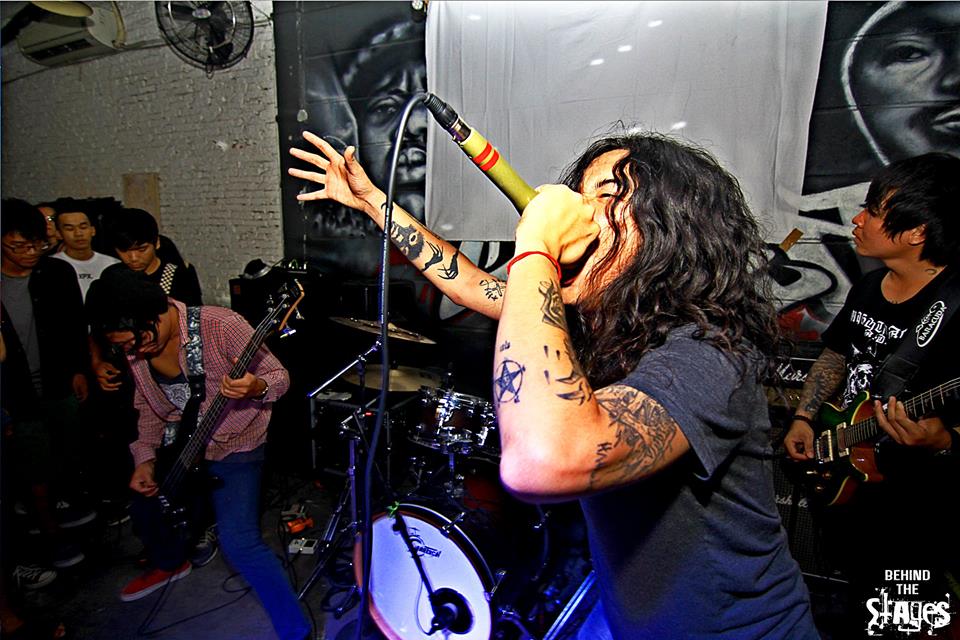 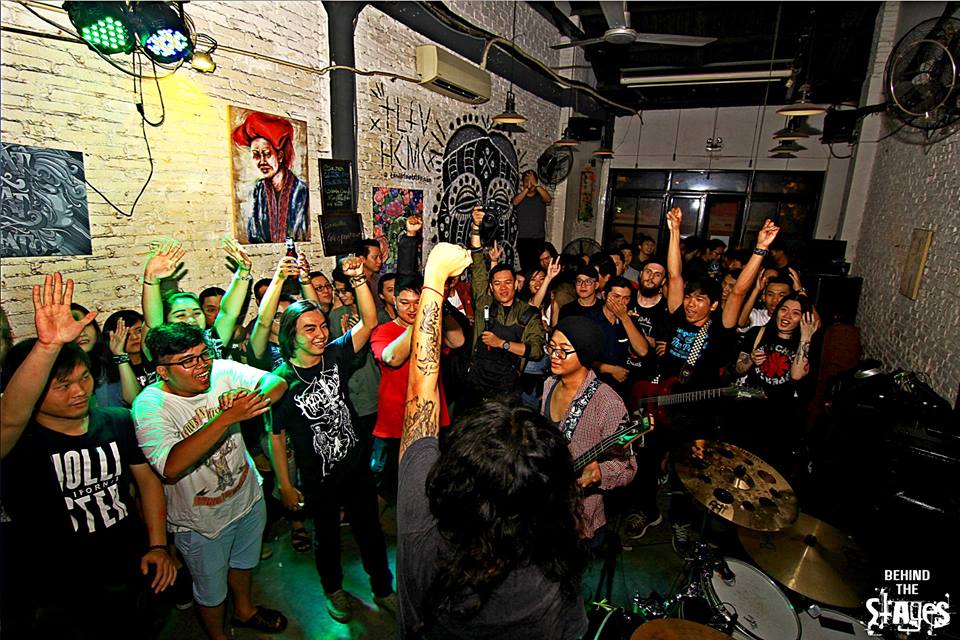 Sliten6ix with their intense and raw show of emotion and angst had really shifted the feel of the floor and the crowd chanted for more.

Powerviolence and grindcore specialists Abrasion from Singapore opened the mosh pit; what tremendous energy and noise from a two piece. Deep, heavy in your face vocals, intense blast beats, the crowd responded to Abrasion’s drive and the headbangers and moshers were unleashed. 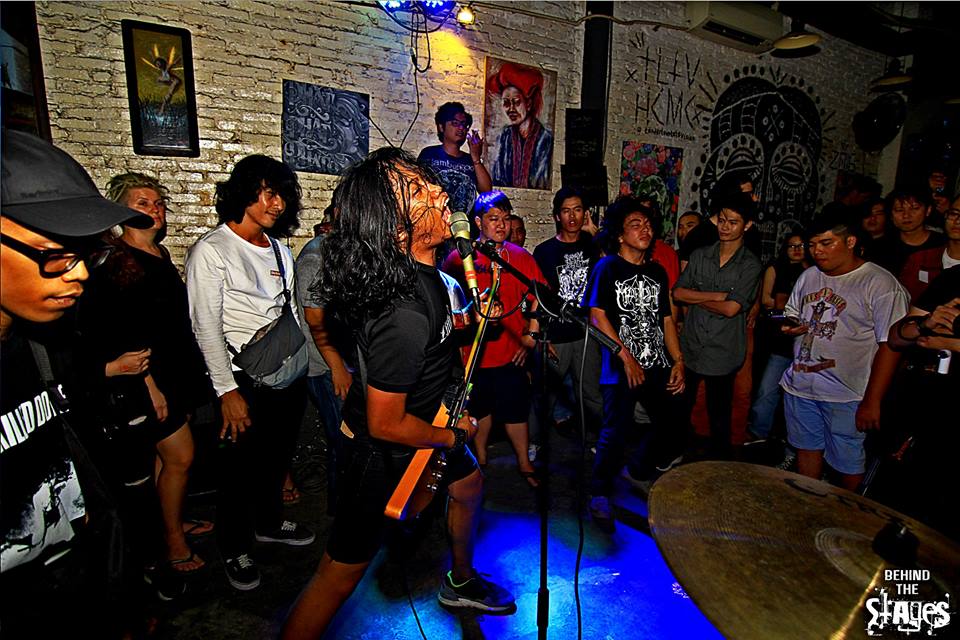 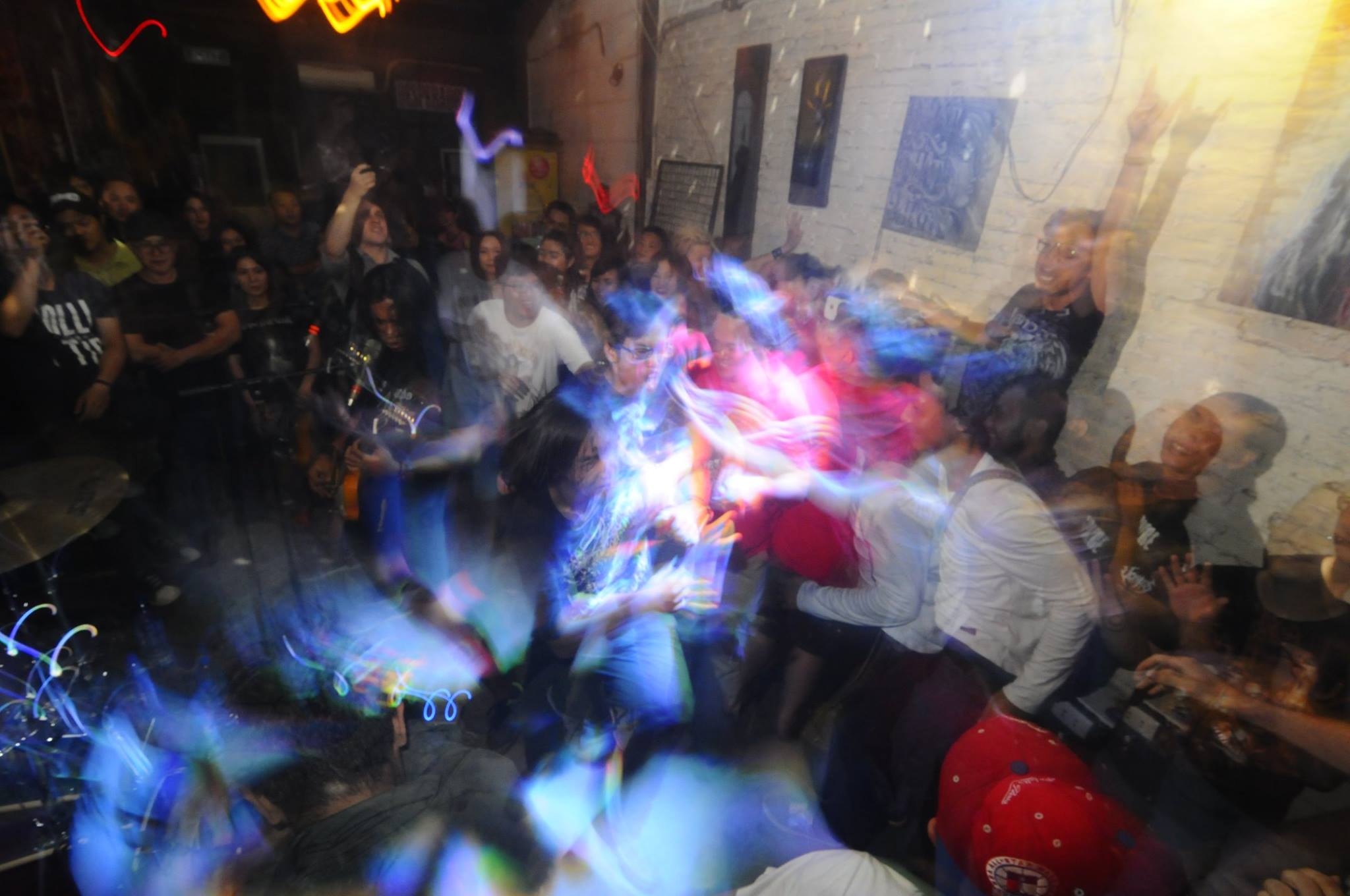 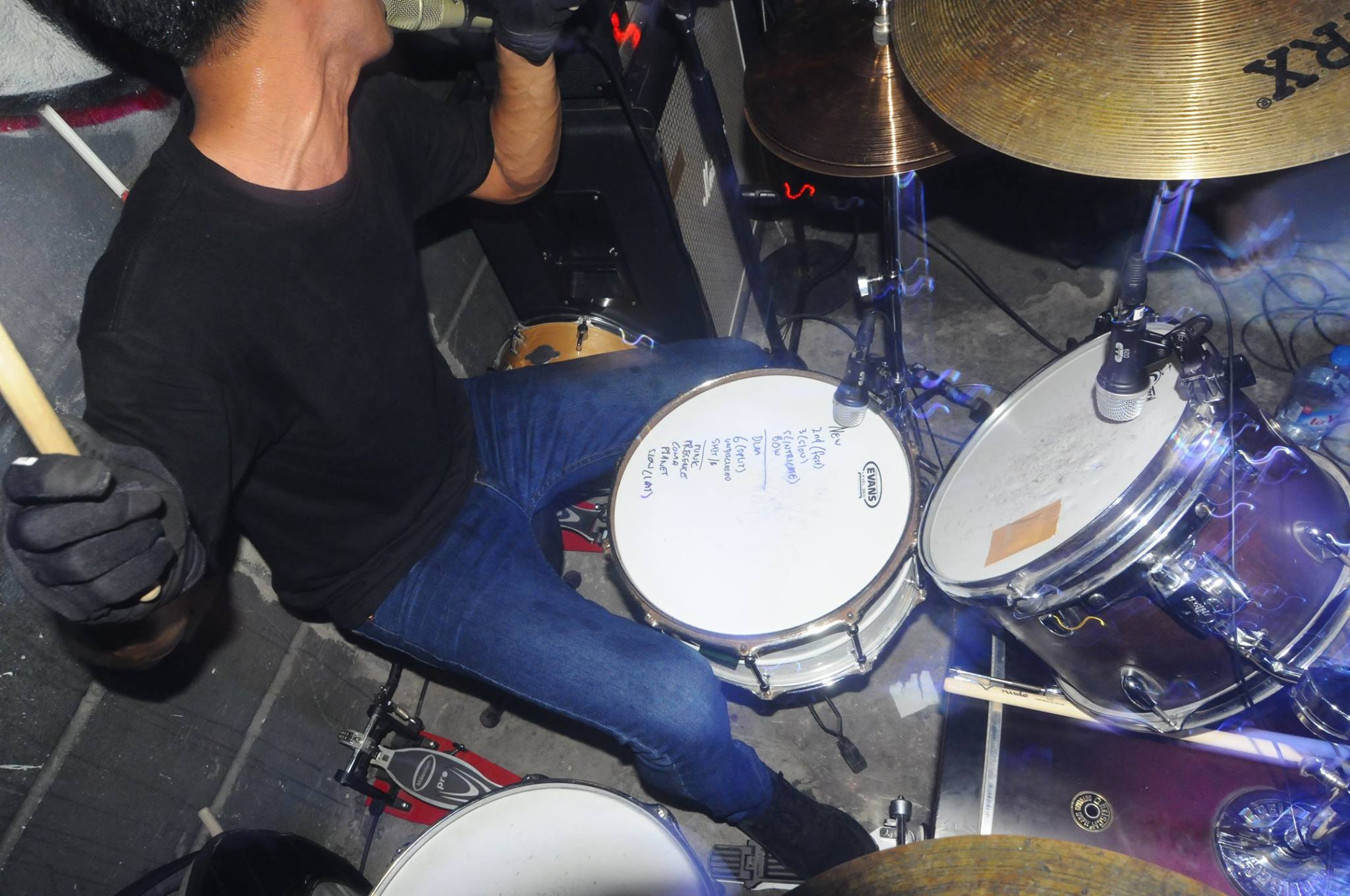 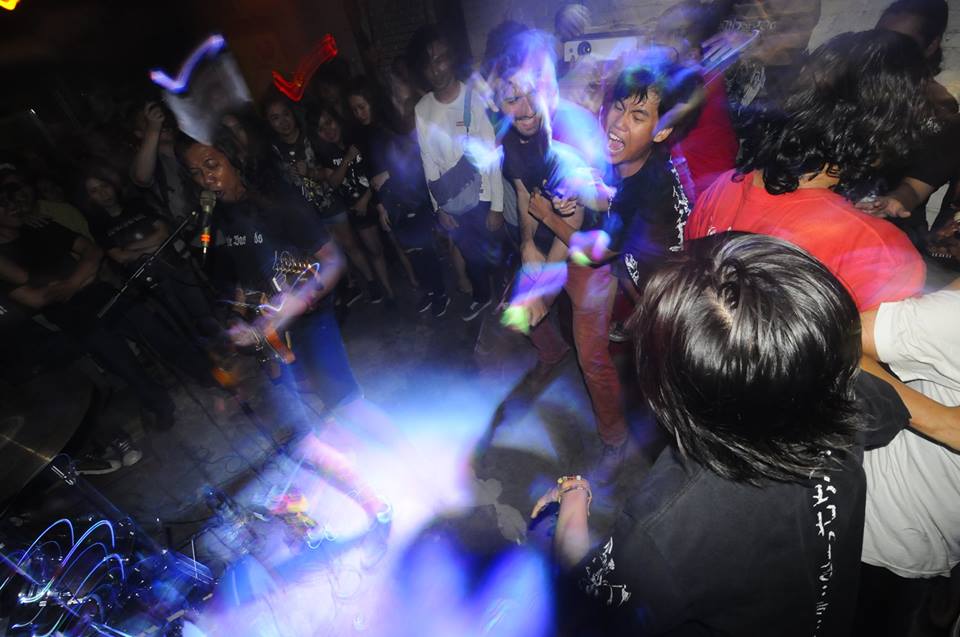 The moment I’d been waiting for; Beelzebud, also from Singapore, had brought doom to La Canalla and I was all theirs. The mood shifted, the crowd was concentrated – engaged, things had got serious.  Images were projected on the wall, an uncompromising reel of despair, death, distortion and horror. I felt drawn into the soul of Beelzebud and the crowd were hooked. These guys executed their performance extremely well with passion and professionalism and I ended the night on a high. 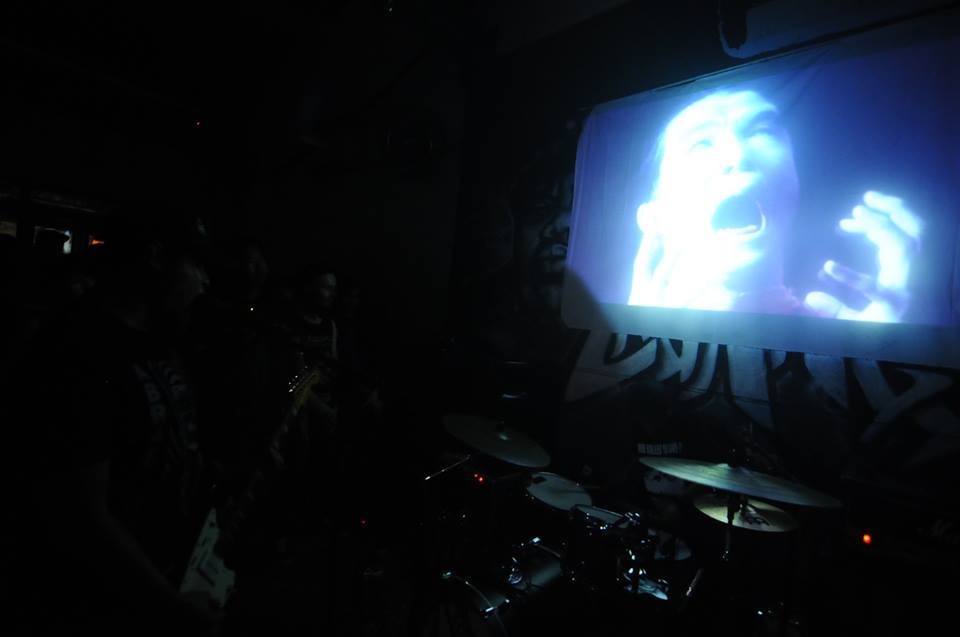 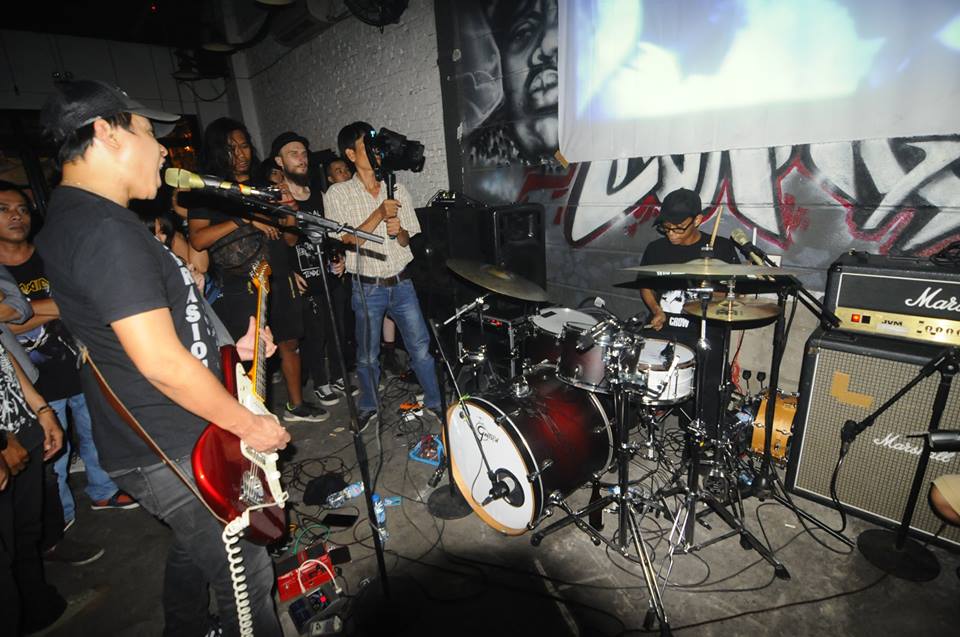 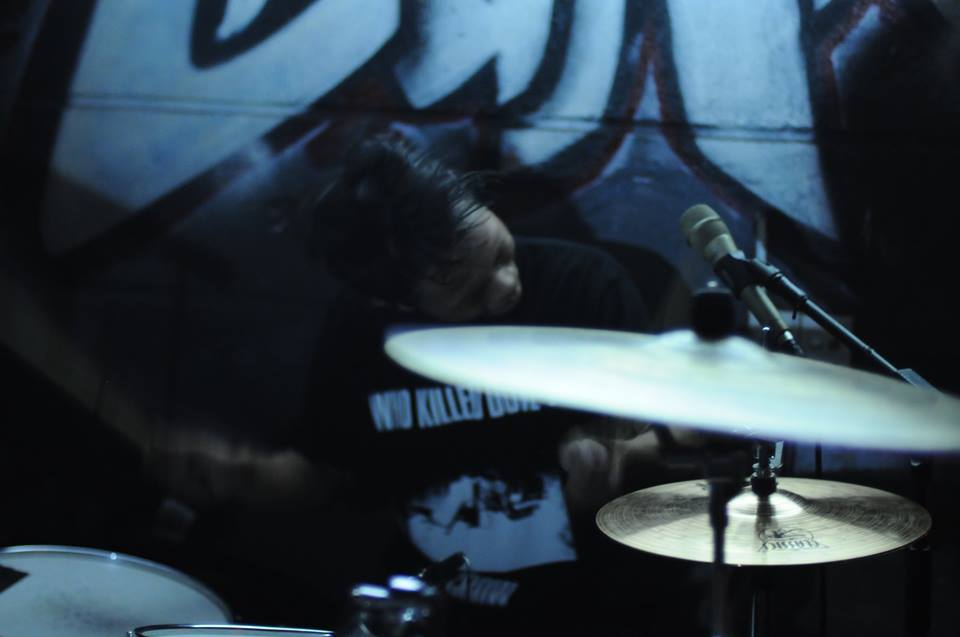 In conclusion, this gig is going to take some beating as a firm favourite small venue show. Beelzebud to me performed, not just music but a show, a release, it was art and a great closing band choice. Sliten6six and Abrasion were crowd favourites and in Ho Chi Minh City where the metal scene is small but strong artists from afar are welcomed with open arms and head bangs.

The venue lent itself to an intimate relationship between performers and the audience which as a space I admit I wasn’t convinced I was going to like at first but I did. And who doesn’t want to rub shoulders with their favourite band in the mosh pit? 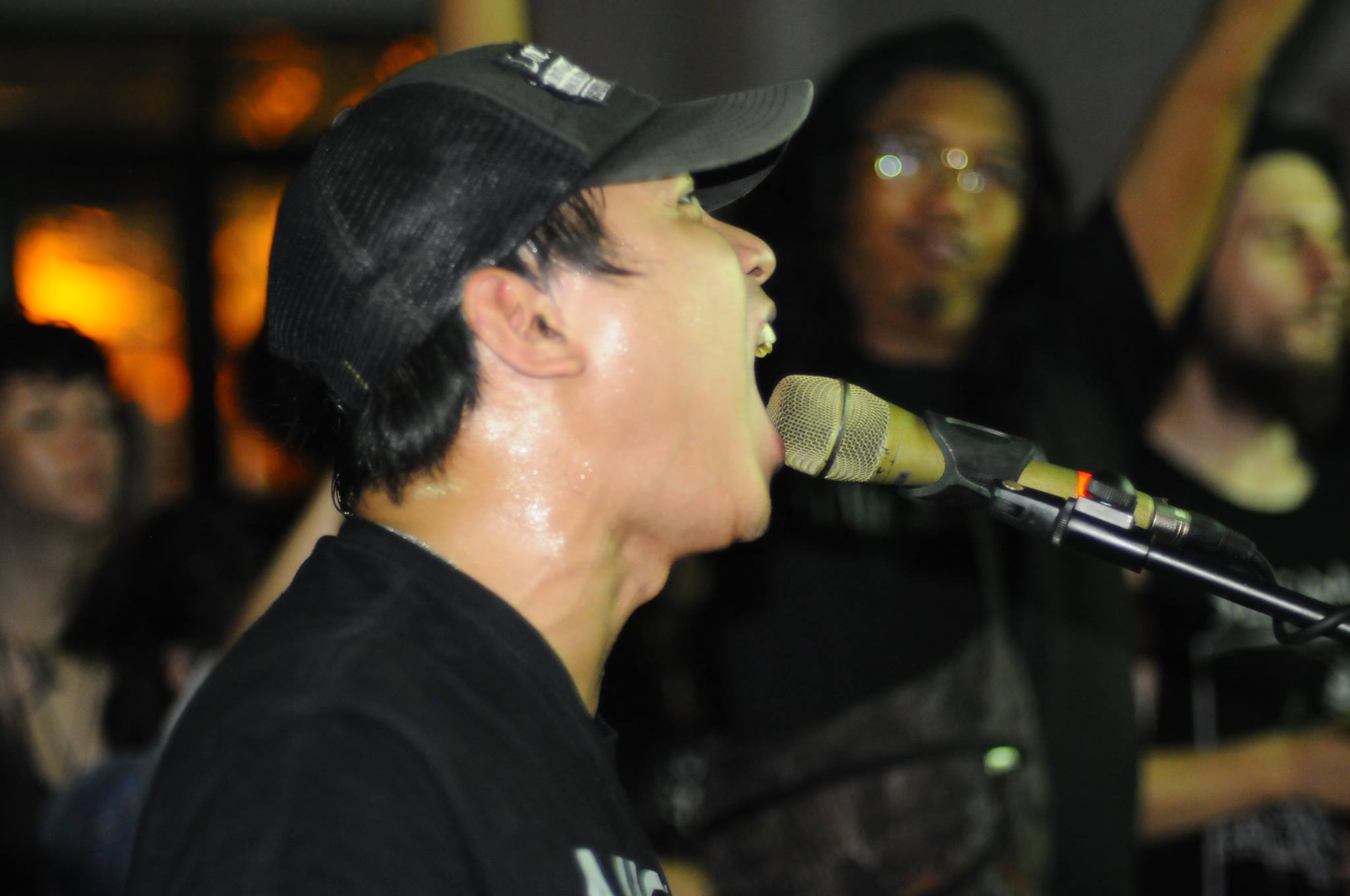 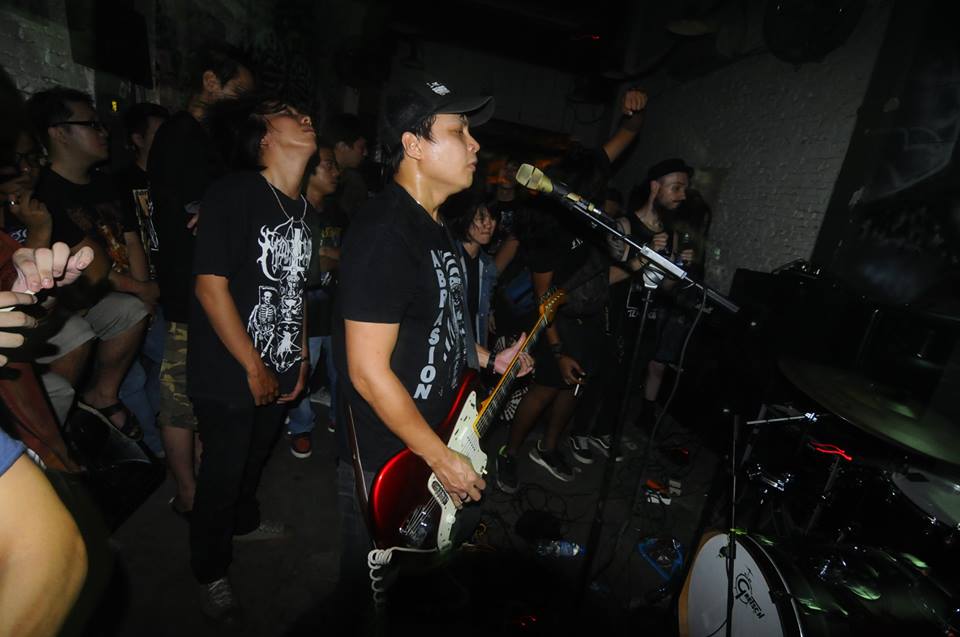 Behind The Stages (email)