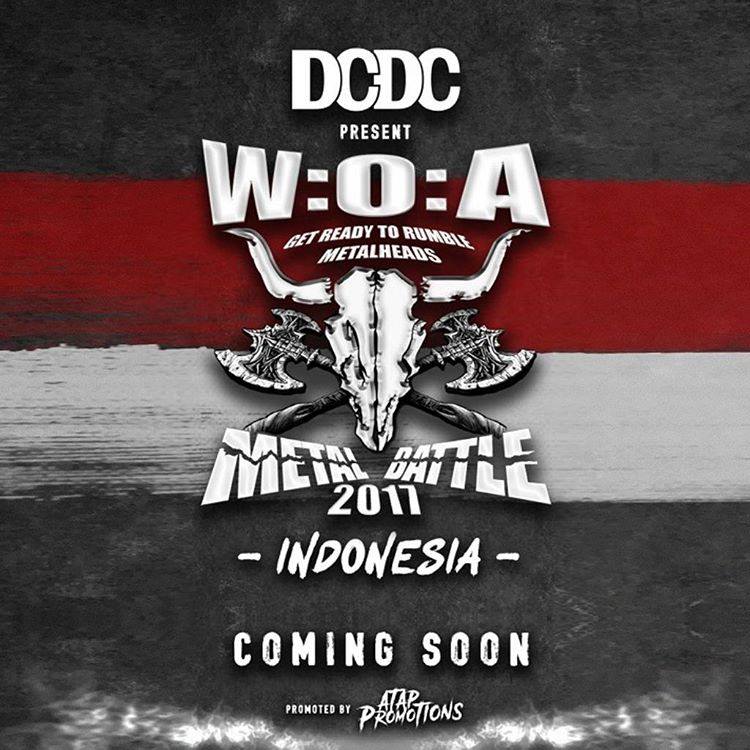 Wacken Metal Battle is an international contest with almost 30 participating countries, and for some weird reason it has never been arranged in Indonesia before. So I´m very proud to being able to help bring bring this massive event to one of the most interesting and thriving metal scenes in the world right now – Indonesia!

This is a process that have been in the talks for almost 2 years now and it´s so nice to finally see how it comes alive and rolls out over Indonesia. Together with the fine folks at Atap Promotions and DCDC – Wacken Metal Battle Indonesia gives the unique once in a life-time opportunity to one winning upcoming band from Indonesia to go to Europe and represent their country at the finals of Metal Battle 2017. Once at Wacken in Germany the winning band will be able to meet with representatives from international metal record labels, publishers, agents and promoters – possibly making a change for their band´s career for ever.

If everything goes according to plan, I will hopefully join the band in Germany at Wacken to help them out, kinda like a Tour Manager – same job I did for Jasad & Burgerkill in 2015´s legendary Bandung Blasting Euro Tour.

Here is an article I wrote for DCDC about Wacken and why all upcoming Indonesian metal band should apply for this super cool event. This is the English version not published before, the Indonesian version can be found here.

” Faster, Harder, Louder. That tagline is actually not just some cool thing to say, it really encapsulates the whole experience, feeling and meaning of Wacken Open Air. It´s simply the biggest and best metal festival in the whole world, thats it. Every year around 75.000 tickets are usually sold out in just some hours.

No words can express how totally awesome Wacken is in every aspect of bringing the world´s best metal acts to play infront of the biggest metal crowds on this planet.

Wacken is just faster, harder and louder than everyone else.

When you walk around the Wacken fields you´re totally blown away by the greatness of it all. Around 80.000 metalheads in all shapes and sizes, men and women, boys and girls with their parents and each and every metal genre is being represented. You feel part of something larger than life.

And everyone you meet is just truly happy. Brotherhood and sisterhood, everyone are friends and no-one wants these days to ever end. Wacken is the place for metalheads to be metalheads, whatever that might mean to you – its all fine as long as everyone are happy and the music is louder than hell.

In 2015 The Metal Rebel helped bring Jasad & Burgerkill to Europe for the first time in their careers. I worked as the booking agent and I also joined them as the Tour Manager on all three festivals.

Burgerkill played their first gig ever in Europe at Wacken, a debut show many metal bands can only dream of. The legendary Wacken is a dream come true for any metalband. Burgerkill represented their country, the Indonesian flag was put over the PA and they played for every Indonesian metalhead everywhere in the world that night. And they kick ass.

Now lets bring this to the next level for the Indonesian metal scenes.

Some countries normally participating were asked to pause this year just to give room for newcomers like USA and Indonesia.

So why should Indonesian metal bands join? Well, if the first part of this text didn’t get you all ciclepiting in your living room of excitement then here is why. Besides getting both domestic and international recognition for your band and the super awesome experience of going to Wacken Open Air to represent your country – once at Wacken your band will also get access to the Wacken Metal Battle Lounge.

Wacken Metal Battle Lunge is THE place for your band to network and meet international booking agents, publishers, labels, managers etc. Oh, and there´s some pretty decent prize money and gear to win as well.

I truly believe that Indonesia has some of the world´s best and most thriving metal scenes. So much have happened since I first got into the Indonesian scenes back in 2008, it seems like everyday new super talented metal bands pop up and blow me away.

So thats why I really want to urge all you up-coming metal bands in all genres to raise up to the challenge and join Wacken Metal Battle Indonesia – I know you will show the world that the Indonesian metal scenes are one of the best!

The Metal Rebel IS NOT involved in the practical arrangements of the events of Wacken Metal Battle Indonesia, nor are we in any way part of the selection of the participating bands or the whole process of voting and selecting the winner.

So please don’t contact TMR in this matter. We have no opinions or any power to influence or in any way impact the final decisions in selecting the winning band. This is 100% up to the Indonesian Jury on the final event in Indonesia. The promoter is following the international rules and regulations for everything regarding both the arrangements of the events and in seceding the winning band. So please don’t ask us about this process.

Everything regarding Wacken Metal Battle Indonesia such as applications, information and currents updates can be found here!