What´s wrong with Indonesia today? Where is all this insane brutality coming from? How is it that this country just keeps producing some of the world´s most amazing brutal death metal bands?
Stigmatuary from Bandung just unleashed their first pig-slaughtering, mindfucking out of this world evil full length album.
It´s called “DECIMATION OF PSYCHE”. And I´m already beat. Must.Catch.My.Breath. Can someone else write this review?

No seriously, in fact I´ve been waiting for a long time to do this review, ever since I got Stigmatuary´s PROMO CD back in 2013/14 I felt that this band is onto something fkn evil. Their PROMO CD featured only 3 tracks but was packed with tight, twisting and promising brutal death metal in its finest form. With a suitable mutated wild boar´s head drenched in blood on the cover. The featured tracks “Concept Of Human Torture”, “Pedopilia Sadistis” and “Psychopathia” all made it from the PROMO CD to this full length some 3 years later, but goddammit how much better they sound now! Of course, needless to say since Stigmatuary are taken aboard the League Of The Sick team of Rottrevore Records – the production of “Decimation Of Psyche” is flawless and just awesome. But it´s evident that the band has grown an matured and nurtured their skills as insane brutal death metal warriors.

So, some days ago I received a package from Indonesia in my mail, you know this physical thing without the “e-” infront of it, the kind of mail that you can actually touch? My darker side of my metal soul felt like a kid on Christmas since I knew it was most likely the pig-destroyers from Bandung who sent me their new CD. Yes it was,  so now I´m gonna review the shit out of this monster album. 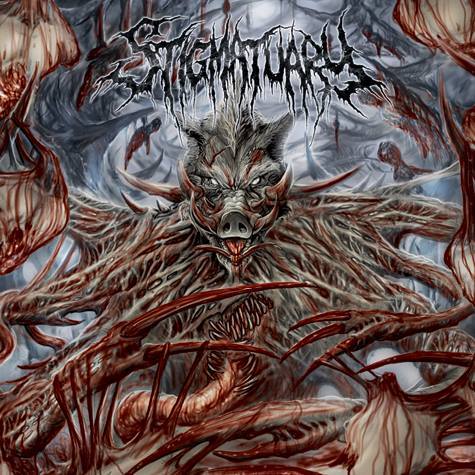 The album starts off with some kind of hellish intro that ends with what sounds like mental pigs killing someone, followed by the first line of attack – “Brutal Infection”. What I really love about this song and album in general is that the guitars are really IN MY FACE! The guitars and drums are perfectly balanced and this genre´s often too prominent growlings is not the case here, it feels a bit lowered in the mix and therefore doesn´t take over too much. It´s worth to mention that Stigmatuary are heavily influenced by this genre´s godfathers of Disgorge & Suffocation as well as Deeds of Flesh and perhaps also Nile, both in terms of style, song arrangements and growls. Less progressive than Deeds Of Flesh and more straight-forward brutal death without the fancy parts. And to be honest, I think “Decimation Of Psyche” has a much better production than any Disgorge album. Yes, I do think so.
Bands like Suffocation, Deeds of Flesh, Disgorge, Nile, Aborted and the likes – they all feature some kind of solos or samplings that creates an eery and atmospheric ambient feeling. Obviously Stigmatuary think that´s lame when you can do the same thing simply by riffing the shit out of the riffs. Five songs into the album I realize that there are still no guitar solos, not anything that even resembles an attempt to make a solo. Only super heavy riffing all over the place, bending and stretching each song´s main riff into different versions. I don’t know if it´s good or bad, but it gives you an idea of how fucking massive the riffing is. Many times on the album you hear the song´s main riff-structure coming back in new shapes and forms, accompanied by unhealthy intricate drumming, making each song dynamic and varied.

The riffing is super fat and heavy, chuggy and razor-sharp, stabbing out the melodies over the inhuman fast drumming.

The drummer should probably go see a therapist, cause that drumming is not healthy. It´s mental. At least go get a massage dude. The opening track twists and shakes of raw power, sharp stops and turns in dynamic patterns and riffing all over the place, and give you a pretty good hint of what the rest of the album is gonna sound like.
Did I say that the riffing is super razor-fucking-sharp-and-chuggy?

As expected, the next song is no ballad nor does it slow down. “Concept Of Human Torture” was soaked in the brutal death metal cattle some three years ago and left there to get really fat and juicy. Just like the opening track it´s packed with epileptic twists and turns, something unexpected sucker-punch you in the face on every forth count on the beat. In a good way.

The slower parts are ultra groovy and violent, all fast circlepits will slow down into a “beat the shit out the imaginary dickhead”-mosh.

A brutal death metal album is not complete without serial killer references or at least something gory and disgusting, and “Monster Of Andes” pays tribute to that fine child-unfriendly tradition. The song title refers to a colombian serial killer who was sentenced for the killings of at least 80 girls, but the mentally ill fucktard claimed to have raped and murdered over 300 girls and women. The song probably does a great job illustrating the synapses in a mentality deranged madman´s brain – they go completely all over the place in all directions at once. The tempo changes are staccato-like in short bursts with growls at every beat, then charging aggressively at you. It´s mad. I love the ending´s almost dance-friendly up-beat riffing – it actually sounds like a madman´s deranged thoughts.

4 tracks into this mindfuck of an album, “Pitam Babi” just keeps the blasting frenzy going, it keeps the style of the previous tracks but still with it´s own character. I tried to count the different blast-beat techniques and managed to identify at least 4. Maybe I´m wrong, as an intermediate drummer I´m still struggling to nail “Blackened” by Metallica, so maybe I should just shut up.
Anyway, everything is still as super tight as the previous tracks and goddammit those guitars they just tear up my ears, thats how sharp they sound.

The next song that was on the PROMO CD 2013 is “Pedophilia Sadistis” and just like “Concept Of Human Torture” it has grown bigger and badder, though very similar to the “original” version it somehow feels tighter. The first sampling on the album features a woman screaming in horror in a nano-second break.
“Pedophilia Sadistis” is no exception to the “no-solos” approach and I actually think it works great so far.

Finally you get some kind of break, I can swim up to the surface and catch my breath six tracks into the madness. “Ereksi Dekomposisi” starts “slower” and in my opinion that´s a great thing, the first half of the album has been raging like a downhill freight-train in 666 Km/h. This song is super heavy and the double bass drumming are allowed more space in longer passages with the slower guitars, which creates a heavier more rhythmic groove. The middle part of the song is fast with a very melodic evil riff, then slows down again in the end. Probably a moshpit favorite live. This song really stands out that way, making it one of my favorites on the album.

The title track “Decimation Of Psyche” is similar to “Ereksi Dekomposisi” in terms of tempo changes, it´s shifting between ultra heavy slower parts and the album´s traditional mega-fast blast-beat frenzy. When Stigmatuary slows down, they almost reach that Dying Fetus-groove that I love so much. It´s hard to say what really separates the title track from “Ereksi Dekomposisi” – they are both awesome songs and full of twists and turns.

“Simulasi Antipati” takes the style of “Decimation Of Psyche” & “Ereksi Dekomposisi” to the next level – this is in my opinion one of the strongest songs on the whole album. It starts of fast and pissed off just like many  other tracks on the album, but then something happens halfway through – it´s fucking Jasad groovy! The rest of the song continue to shift between faster tempo and painfully heavy slower sections where the moshpit armies of Indonesia will hurt them selves. The last two tracks “Psychopathia” & “Innumerable” are both great closing songs to an album completely packed with violent brutal death metal.
I just wish Stigmatuary would dare to hold the massive heavy slow part in “Psychopathia” to the very end of the track and not feel the need to speed things up towards the end.

Would they have kept the slow part fading out the song it would have been one of the meanest and heaviest moshpit anthems coming out of Indonesia in 2016. Sometimes the simplest way is the best, but many upcoming bands tend to complicate things technically in order to appear “better”.

“Innumerable” closes the album and there´s not much more to say that haven’t been said already in this review, it´s pure Indonesian brutality at it´s finest. This song has the same un-earthly evil slower parts like “Psychopathia” that will make the crowds lose their shit. The faster parts make you wonder what´s wrong with the musicians, the band playfully own the song and deliver a package that will blow you away. The only surprise is the abrupt end of “Innumerable” – it just stops and thats it. End of story, go home. That´s cocky in a way that I like, but also lacking some kind of epic climax to the album´s grande finale.

It´s easy to forget that “Decimation Of Psyche” is a debut full length album by upcoming Stigmatuary, you get the feeling that this is a band who´s been around for quite some time. So I realize I judge them thinking that this is like their 4th album or something. But it´s not, its their first.
And that Ladies & Gentlemen is a huge achievement, to produce something this air-tight, ultra violent and insanely complex on your debut album is nothing short of a brutal death metal masterpiece. Keeping every song short around 2.5 to 3.5 minutes makes it even more compact and massive. And I think that every song has it´s own character and charm – except for a few flatlining sections here and there – but keeping things this varied and dynamic is also a smaller achievement in this genre.
Sometimes I wish they would have the guts to keep some things simpler, like keeping the slower parts for just a tad longer or maybe just maybe add something reminiscent of a solo or something that would give some songs even more character. But that´s nothing to bitch about – if you´re a fan of brutal death metal you will take this album and make sweet love to it. The album will love you back, it´s your best friend in the vast brutal death meal ocean. 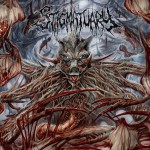