I love when bands use their own local languages and history to make up band names, album themes and what not. It adds a uniqueness and a different flavor instead of the standard “try-to-make-the-most-brutal-and-unlogic-band-name-as-possible”. So, with a name that spells disaster and catastrophe you´re all good to go as a death/thrash metal band, and MALAPETAKA from Kuala Lumpur starts off “Lawless Perdition” like total pros.

The ominous intro “Dark Revelations” sets the mood perfectly, with distant church bells ringing in the rain accompanied by a  horror movie-like voice.
The first track “Higher Heaven” hits you in the face in the best Slayer/Death-way possible with evil riffing, classic death/thrash “beat the shit out of the ride cymbal” drumming – a bit reminiscent of Morbid Angel.
The vocals are perfectly rasping, heavy, evil and scary, and that´s something that really sets this band apart from many bands in the genre, if you ask me.
Malapetaka takes what they love from these classic thrash/death bands and just go with it, they are not re-inventing the wheel in any way but it just sounds f*cking good. If you play death/thrash what can you do? It´s not like you´ll add rap vocals or flutes to make it sound fresh. No, you stick to the real stuff.
“Higher Heaven” wouldn’t be a complete opening song without a slow part and a solo, so you won’t be disappointed on that matter as well – the solos really stand out and take the songs to the next level.

The title track “Lawless Perdition” keeps the classic death/thrash flame burning and it´s actually even more brutal than the opening track, it feels faster and angrier and somehow the ride cymbal endures an even more severe beating. The lyrics deals with religious issues, lies and deception – and the compositions and arrangements  just sits really tight and nice – it´s evident that MALAPETAKA really took their time to fine-tune their crafts as musicians before they just spewed out a “debut” album. Respect.

On the tracks “Incomprehensible Thoughts” & “Abomination of Existence” something wonderful happens – they slow down and let the listener soak into two tracks that are more varied and dynamic. The groove and tempo changes in “Incomprehensible Thoughts” let you recover from the onslaught of the first two tracks, but make no mistake – the latter half of both songs grabs you right back into the neck-breaking madness.

The solos in “Incomprehensible Thoughts” & “Abomination of Existence” are both sick, they scream and twist as if the guitars were in real pain.

“Angkatan Mayat” (meaning like The Force of the Body/ The Body´s Power ) is the only track on the album in Malaysian language and it starts with a growl from hell followed by more speedy drumming and super tight riffing. MALAPETAKA does a great job in adding ambient and atmospheric parts to the tracks, a little bit like Death but less “soft”, if you can ever refer to anything from Death as soft. Perhaps I should explain so I don’t receive any death ( no pun intended ) threats; Death used to implement almost clean guitar playing in some parts their songs which added a super atmospheric feel, then shifting back and forth between distortion and this clean “epic” playing. Like “Crystal Mountain” for example, classic death metal. If you don’t know Death, then go die or punish-listen to Justin Bieber for 12 weeks straight.
Anyway – my point is that MALAPETAKA does NOT add any clean guitars to their songs for that nice ambient “epic” feel, instead they make the songs dynamic and very well arranged with distorted guitars in very atmospheric solos and harmonies. Not saying it´s better or worse – it´s just how they chose to do it.
And it works very well, making each song interesting and full of character. Ok, they do add clean guitars in one track, but it´s only in the opening and ending of the song “Morbid Tales Of Divine Heresy” – the most catchy and melodic track on the album. Absolutely nothing like a ballad, no for God´s sake, that blasphemy in this genre. This song is like an instrumental late middle act of the album, before the trilogy of Tale 1, 2 and 3 end this moster of an album.

“Tale I: Creation”, “Tale II: Apocalypse” and ” Tale III: Rebirth” are all long, juicy, heavy and dynamic sons of bitches – clocking in at 5:18, 5:30 and 6:49 respectively. These songs kind of go hand in hand, they are different but somehow belong together and they are all packed with all the evil and thrashy death riffing, screaming solos, blazing fast ear-molesting drumming, dynamic arrangements and top notch vocals. All the instruments and the vocals really balances each other nicely and makes a perfectly fresh blend of Slayer, Death, Kreator, Morbid Angel and maybe maybe a dash of the groove from some of Vader´s songs.
It´s hard to pick one favorite track from “Lawless Perdition” because it´s so full of really great songs, I would probably need to live with this album for some weeks to find my top pick, but it would probably be one the the last songs like “Tale III” or “Incomprehensible Thoughts”.
The fact that this album is DIY-produced and the weird fact that MALAPETAKA is still not signed to any label just makes this debut full-length even more cool – I think a bright future lies ahead of this band and with bands like MALAPETAKA the Malaysian metal scenes are on the offense in the Southeast Asian metal frontier.

GET THE ALBUM THROUGH MALAPETAKA FACEBOOK OR VIA EMAIL – malapetaka.kl@gmail.com 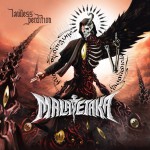 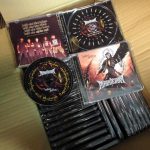