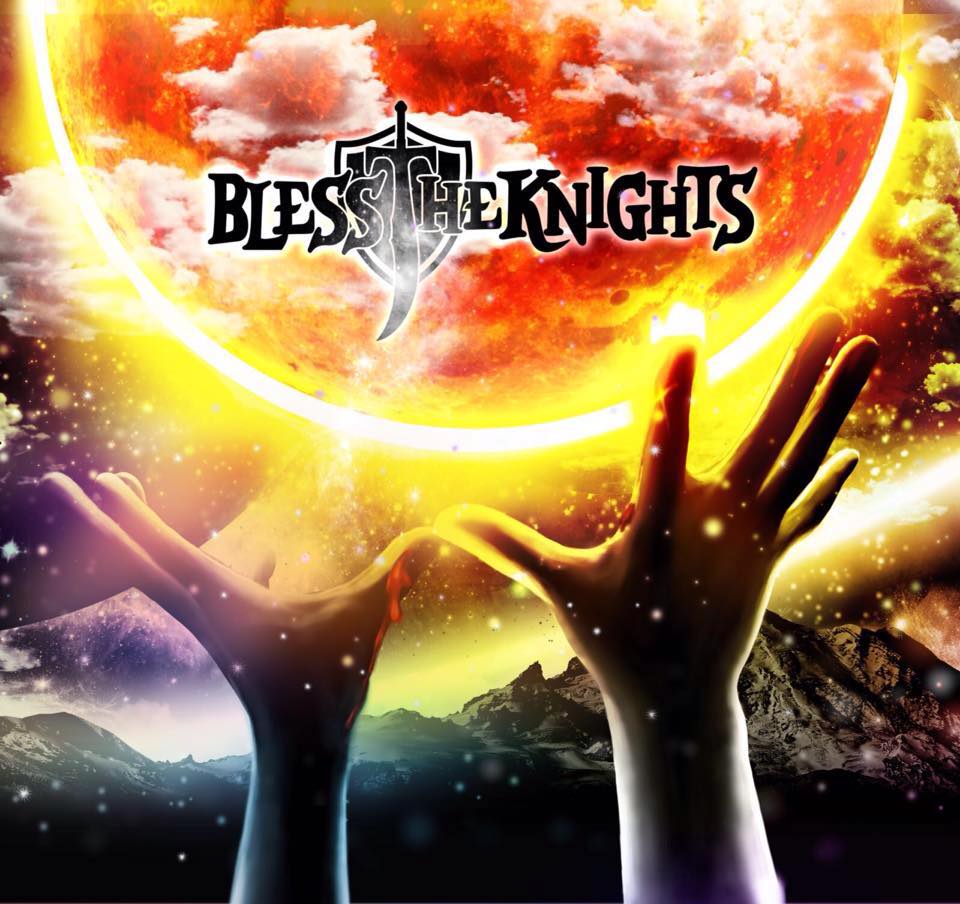 Bless The Knights is a fresh breath of progressive metal air in the vast Indonesian metal scenes, normally famous for it´s endless stream of death metal and hardcore. It´s super sharp twists and heavy turns is a progressive 7-string assault, but do they pull off the trick of not making you schizo and go mad?

First things first, Bless The Knights is not a Freemason worshipping occult band from somewhere in Europe´s mystic underground halls and catacombs. No, they are a super tight upcoming progressive heavy metal band from Tangerang in Indonesia, consisting of 4 incredibly talented musicians by the names of Fritz Faraday on vocals & guitars, Novy Rock on vocals, Olgie Alvianus on guitars and Q on the drums.

Bless The Knights was formed back in 2009 by the current vocalist and guitarist Fritz who was fed up with the saturated metal scenes in Indonesia at that time. The original name of the band was BLITZKRIEG and that´s actually quite fitting with how their music sounds today, it´s a f*cking Blitzkrieg onslaught on your ears and mind. This onslaught is mostly all good and dandy, but sometimes at least for me ( after all, it´s all about your own preferences and liking ) some of the songs could be just a tad shorter and more structured into one direction (absolutely NOT the boyband One Directon ). But I guess that´s what progressive metal is all about, not being flatline and boring like many brutal death bands sometimes tend to end up being, all songs just blur into each other and – boom, the album has ended and you thought you were still on the first track. Like WTF?

Anyhow, Bless The Knights as of today just released their second album, self entitled and nicely wrapped up in a strong cosmic, science fiction album cover. What hit me first is how impressive the production of the album is, the recording quality is outstanding and absolutely top notch. Everything is well balanced and nothing gets too noisy or takes over, who ever sat behind the knobs and dials in the studio knew what he was doing. All songs are in English which makes it more easily promoted over seas.

It´s all super tight and once again, Bless The Knights should bless themselves instead for some knights – they are really great musicians!

After some listens it becomes quite clear that the band is heavily inspired by bands like Protest the Hero, Dream Theater, Periphery and Threat Signal and similar bands in terms of the progressive style, nicely arranged harmonies and how they shift between super clean and, damn I must say it – wonderful singing, and pissed off hardcore screaming. The main vocalist Novy Rock actually won the Yamaha Asian Beat Awards 2007 for ” Best Vocalist” which comes as no surprise at all. This guy has an amazing range that he utilizes throughout this album and it can’t be stressed enough how important he is to Bless The Knights, Novy Rock´s singing achievements on this album should be up for any music award event in Indonesia this year.
Bless The Knights also take a dash of the aggression, fury and metalcore-ish blasting and breakdowns of Lamb Of God, and they shove all their influences down a metal mixer and just let it fly all over the place.

I´m surprised how well it works most of the times, this album is packed with super groovy, heavy melodic riffs and solos that goes perfectly hand in hand with the intense and super tight drumming – you really do get hit in the face.

The drumming is often quite reminiscent of LOG Chris Adler´s whipping ultra tight style – doing so much, so tight and so in-your-face in so few seconds. And yes that´s a compliment.
One example is the second track of the album, “The Boundary of Laughter and Sadness”, it starts off with an 18 seconds groovy riff that makes your head go on headbanging holiday. Aggressive hardcore/Lamb Of God-stylish growls takes over, charging at you over shrieking guitars and intricate drumming patterns.
The chorus in this progressive blitzkrieg warfare shifts to clean singing over a catchy melody before the growling strikes back on the next verse. Mr Fritz Faraday shows why is he´s called “Spider Fingers” with his massive 1.20 minute solo (!!!) and the song clocks in at 6.09. I just wish they would have gotten back to the intro riff once more in the song, it comes off like a main riff but it´s just an opening thing, they tease parts of it as the outro. Maybe genius, I don’t know, I just wanna hear it again because it really rocks.

The track ” You´ve Created Your Own Monster” is the band´s single and only music video and yes, it´s a great song complete with everything that makes Bless The Knights one of the most interesting Indonesian bands in this genre today. But, and here´s the big but – the decision to have rapping vocals on the verses/bridges is maybe not the best idea the band had. It´s absolutely not that the rap itself is bad or that I personally would hate rap in metal – no no, I´m a big fan of KORN, Limp Bizkit, Rage Against The Machine, Slipknot etc – hell even Papa Roach did some awesome tunes in my youth. On the contrary, Ritz´s rapping is actually quite good, I just think it doesn’t fit in the song or on the album as a whole.

I can totally see why a band with the ambition to go big on an international level would do this move in their single, by adding this rap style they open up the targeted audience much more – probably very attractive to the metalcore kids who are yet to discover the more progressive side of metal. But to me this is too big of a breach of the band´s already established style on the album – it´s only on this song on the whole album that you´ll find rap style vocals. With the amazing singing of Novy Rock, the super talented guitarists in both Fritz and Olgie and the very tight and innovative Q beating the shit out of the drums – Bless The Knights already have their recipe for fame set out for them. So let´s not make too big of a deal out of it, even though I realize now that I just spent two paragraphs ranting about it.

The other “shock” on the album is the epic ballad called “Light At The End Of The Tunnel”. At first I thought it was a cover of some band´s hit single, like Creed, Nickelback or something similar – but I quickly realized that it´s not – it´s a masterpiece signed Bless The Knights. This epic track is like a soundtrack to a story of success, a feel-good movie´s closing song. I can see thousands of hands waving in the air on outdoor festivals in Indonesia, girls in the front rows singing and crying and the more hardcore fans waiting for the next song to start the moshpit again. The song makes a great oasis on the album to catch your breath and take a break from the immense onslaught of the previous tracks, with the best singing achievement by Novy Rock on the album – complete with a sing-along chorus and hand clapping.

If the rap vocals on “You´ve Created Your Own Monster” was a daring and perhaps questionable move, then the super soft and wonderful ballad of “Light At The End Of The Tunnel” is just the total opposite – it shows a confident band with the balls to do whatever they want to.

Regardless anyone´s opinions about ballads on metal albums, if you hated “Fade To Black” and can’t stand “Nothing Else Matters” – I think Bless The Knights deserves respect for this epic song. Maybe the next single?

Moving on, the album features guest appearances by the locally legendary Indonesian guitarist Eet Sjahranie of the band EdanE and bass virtuous Arya Setiadi of Voodoo on the track “Surrounded By Idiots” – a cool song with it´s own great twists, but not one of the best on the albums. To be honest it blends in with the others, and get´s overshadowed by the much better and uplifting, blasting, moshpit friendly “Hell is The Best Place For You” – which half way into the song sports the heaviest breakdown on the album, ready to stir up the most violent Windmill moshpit at any show.
“Redemption” is one of the best – perhaps THE best – track on the album and would in my opinion make a better single than the chosen one, simply because the fact that I believe “Redemption” better captures the essence of the band – it´s f*cking 8.35 minutes long and still never gets boring. Built around a strong, heavy, evil riff the song just takes off into an orgasm of riffing, bitchslapping drumming and through all the amazing ranges of Novy Rock´s voice capabilities. At 4.35 into the song everything stops and a teasing drum bass beat builds up the tension, climaxing in some sort of Eastern rhythmic ambient arrangement with screaming high pitch vocals, leading up to another 1-minute monstrous solo by Mr Fritz in all his glory. This is what I´m talking about! The song just hammers down the essence of this band and I love it.
By the end of the album my head is spinning from the progressive onslaught, and the closing song on the album “Kill The Tyranny” doesn´t break any real new grounds on the album. Meaning it keeps the fine tradition from the previous tracks, blasting out intricate drumming, guitar shredding that make fingers bleed and more great singing in all kinds of nuances. If you already love the album from the first 8 tracks then you´ll love the 9th, it´s as simple as that.
Bless The Knights can be very proud of this self entitled album, and I can see this band playing bigger and bigger stages both in Asia and perhaps globally if they keep up the good work and keep evolving.
According to their US label Shredguy Records they are THE hottest band in Southeast Asia and perhaps that´s not entirely true, but I´d say they are a very fresh breath of air, one of the most interesting metal bands in their genre in Indonesia and absolutely a strong force to be reckoned with.
And to the question in the headline – yes, Bless The Knights pulls off the trick of being totally progressive mental without making the listener go mad. 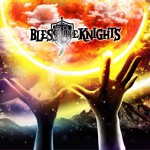 Progressive onslaught!
The short story
Finger-bleeding riff-o-rama by Indonesian progressive maniacs Bless The Knights. A fresh breath of air and a future force to be reckoned with.
Gallery 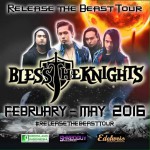